Padre Pio and the Angels.

Mr. P. Biavati was on his way to San Giovanni Rotondo to attend Padre Pio's Mass and make his confession to him. He began his journey in the morning, leaving from Florence, quite a distance away from saint's friary. But the traffic was very heavy on the main highway heading south, the “Autostrada del sole,” which incidentally is the oldest European motorway. The congestion on the road caused him serious delays, and instead of reaching San Giovanni by sundown, he had only gone as far as Naples. Tired and agitated from the drive, he thought it would be best to stay overnight there, and then proceed the next morning. Before exiting the Autostrada, he stopped at a rest stop for some coffee, three cups in fact. This made him feel so refreshed and awake that he scrapped his plans to stay in Naples that night, and instead decided to drive the rest of the evening to his destination, a distance of about 135 miles.


It was late at night by the time he left the Autostrada and took the road to San Giovanni Rotondo. The drive would take almost three hours, but amazingly Mr. Biavati remembers nothing at all of the trip! All he can recall is starting the engine, and putting his hands on the steering wheel. The next thing he can remember was his car approaching the square in front of Padre Pio's friary. At that point, someone shook him on the shoulder, and said, “Come on, now, take over!” Fearful and confused, he parked the car, rested awhile, and then made his way to the church for Padre Pio's early morning Mass. After the Mass ended, he was able to approach Padre Pio to tell him how astonished he was to ride all the way from Naples, without remembering that he drove the car at all. But Padre Pio replied with a smile, “You are right. You were sleeping all the way and my guardian angel was driving for you!” 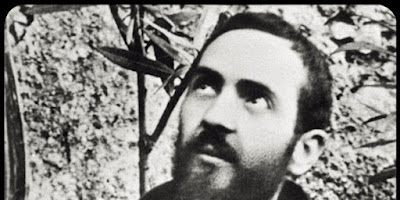 Kevin Hale, who lives in the Chicago area, visited San Giovanni Rotondo for a week in January of 1965 where he attended the 5:00 am Mass at the friary church. When Padre Pio took off his half-gloves during the Mass, Kevin was able to clearly see, from his vantage point, the marks of the stigmata on the saint's hands. One morning he took a crucifix with him to Mass, which he had purchased at a nearby religious goods store. Afterwards in the sacristy, Padre Pio came to bless each person there. Kevin extended his hand with the crucifix as Padre Pio approached him. Seeing the crucifix, he blessed it, kissed it, and then pressed it to Kevin's lips for him to kiss it also. Then Kevin kissed Padre Pio's hand, and when he did so he immediately smelled a strong, sweet fragrance, similar to cinnamon and roses. The aroma stayed with Kevin for almost an hour.


One night at his hotel before going to sleep, Kevin prayed to his guardian angel. He asked him to go to visit Padre Pio and tell him about all of his spiritual needs. The following evening, he joined the villagers and pilgrims outside in the square by Padre Pio's monastery cell, to bid him goodnight. He came to the window and gave everyone his blessing, speaking something in Italian to the group. Kevin asked a woman standing next to him, who spoke English and Italian, to tell him what Padre Pio had said. She told Kevin that Padre Pio said that he had been kept awake the previous night by an American's guardian angel.


Two young girls, who were neighbors, lived with their families in San Giovanni Rotondo. One night, they stayed over together in one of their houses. They did a lot of talking before going to bed, and the conversation got around to a famous person living right in their own town, Padre Pio. They were at the age when religion was beginning to make an impression on them, and they had heard that Padre Pio has a special relationship with the angels. They were discussing the report that anyone could send their own guardian angel to him to deliver special messages.


They realized that this was not an opportunity to miss. So one of the girls said, “I am going to send my guardian angel to Padre Pio to ask him to cure my uncle Fred.” The other girl declared that she would send her angel to ask for a cure for her cousin. And so it went during the evening, until the two girls fell asleep. The next morning after Mass, the girls went to receive Padre Pio's blessing in the sacristy (this was in the early days, when women were allowed in the sacristy of the friary). But to their surprise, Padre Pio seemed angry at them. He said that their guardian angels had kept him up all night long. First one asked for prayers for her Uncle Fred, then another arrived with a request for prayers for her cousin. “And you kept it up all night long,” he said. “I didn't get any sleep!”


But he was not really angry, he was just trying to point out to them that their angels did really do what they were told. We know this because of what he said to one of his spiritual daughters, Carmela Marocchino, who lived near the friary at the home of Mary Pyle. Carmela wanted to send her angel to him very late one night, but did not do so because she was worried about disturbing Padre Pio's rest. When she told him this, he replied, “You may send your guardian angel any time of day or night, as I am always happy to receive him.” 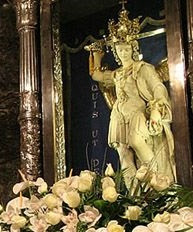 A husband and wife were making a weekend trip to their vacation villa by the sea on the coast of Italy. They were leaving from Rome on a Saturday evening, and planing to spend a few days there to ready the place for the summer months. Traveling with them was their fairly large French poodle. About a dozen miles before turning off from the main highway, the Via Aurelia, to reach their destination, their auto broke down. They pushed it to the shoulder of the busy thoroughfare, hoping that someone would stop and give them assistance. But car after car just sped by, and no one bothered to stop and help them.


They had patiently waited by the roadside for about two hours, and it was starting to get dark. Finally the wife told her husband that they should pray to Padre Pio so that he would send an angel to help them out in this predicament. Padre Pio was still alive at the time, and she had previously spoken to him about guardian angels. Her husband was not too enthusiastic about this suggestion, but he told her to go ahead and try.


Not more than ten minutes later a black car approached, slowed down and stopped at the disabled vehicle of the beleaguered couple. Out stepped a very handsome young man, of aristocratic countenance, and well-dressed in blue. He asked them what had happened. After the husband explained their situation, the stranger confidently announced that he would take care of the problem and fix everything. He lifted the hood of the car to inspect the engine, although the husband, who was an experienced driver, had already done this without finding the problem. But the young man said to him that the radiator had lost all its water and was burnt out. He told him to take the empty can and fill it with water. There was a nearby farmhouse with a well from which he could draw the water.


The husband reached into the trunk for an empty can, and automatically headed for the farm house which was on the other side of the busy highway. Although normally it was extremely hazardous to cross the Via Aurelia on foot, he reached the other side with ease. While he was gone, the stranger in blue fetched a black box from his own car. Taking out a roll of adhesive tape, he proceeded to seal up the radiator. The wife, who was silently watching everything, was amazed at seeing his elegant and tapered hands, gracefully performing the task at hand. She also noticed that her dog, the French poodle, was also watching the man quietly and calmly, although he normally would bark at strangers.


After the husband safely re-crossed the Via Aurelia to return with the can of water, the young man filled the radiator and closed the hood. He told the couple that they could continue on safely, especially since they were quite near their destination. But tomorrow they should not fail to take their car to be checked out. They thanked the man profusely, and with a smile he said goodbye to them, and got into his car which was right in front of theirs. Since it was now nightfall, the couple entered their car and quickly turned the headlights on. The wife was eager to read the license plate of the stranger's car before it pulled away. But there was no license plate! Instead, there was a long white strip filled with what appeared to be hieroglyphics. She could see everything clearly since the cars were still going slowly, and there were no standard numbers or letters where the license plate should be, to indicate a place of origin. They proceeded onward until the couple approached their turn-off from the highway. They occupants waved good-bye to each other from their cars. The pair expected to see the stranger just continue along on the Via Aurelia, but suddenly they could no longer see his car – it had disappeared!


They reached their vacation villa in a rather dreamy state, pondering over what had just occurred. The stranger came directly to them, he knew that there was an empty can in their car, and knew they were close to their home, although they never mentioned their destination to him. The failure of their dog, who was always wary of strangers, to bark at him was perplexing. They could not fathom why there was no license plate on his car, just a strip of hieroglyphics. Finally, whenever they drove on that section of the Via Aurelia in the future, they never could find that farmhouse with the well.


The wife later said that Padre Pio confirmed to her that it was an angel who had come to their aid. The saint had heard her prayer to send them a heavenly helper, and Padre Pio does not disappoint! This story is drawn from a report by Padre Alessio Parente (see below), who lived with Padre Pio for years. Padre Alessio affirms that the adventure, although incredible and unusual, is true. 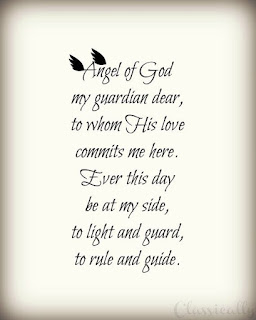 This article is primarily based on accounts found throughout the book Send Me Your Guardian Angel, by Padre Alessio Parente. The Kevin Hale story is based on an interview in Pray, Hope and Don't Worry by Diane Allen, pp. 275-6.


View my Catholic books on Padre Pio and others Here.
Posted by Frank Rega at 10:31 AM