This is definitely on the lighter side...


Finding Yogi!
Mr. Lawrence Peter "Yogi" Berra is widely quoted on the Internet these days, and not just in sports stories.  Below are ten famous Yogisms, followed by 10 recent online articles that quoted one of them, not shown in the quote.  And your task is to find Yogi!

If you get all ten, then “congratulations, I knew the record would stand until it was broken.”

If you score less than 5, “you've made too many wrong mistakes.” 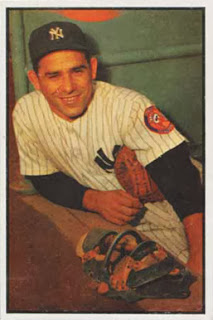 A.   Recently I predicted that although Kent Hovind might keep losing in court, he would never give up his tax fight.  As Yogi Berra said – [insert Yogism].  Nonetheless, I was pretty confident based on among other things the extensive file of appeals and other documents that are on Hovind’s website.  Developments in the last 24 hours indicate that he may have given up.  First, I’ll give you some background.
http://www.forbes.com/sites/peterjreilly/2013/09/28/has-kent-hovind-given-up-fight-against-irs/


B.  Yogi Berra once said, [insert Yogism]. This Yogi-ism is the perfect description of the problems facing Brinker International and its Chili's business. The Chili's concept is well known, respected, and it's so popular that people seem to be forgetting to go there.
http://www.dailyfinance.com/2013/11/09/3-issues-that-threaten-chilis/

C.  Yogi Berra was right when he so ineloquently professed that [insert Yogism], but let me tell you, the Chase for the NASCAR Sprint Cup Championship is indeed done, over, finished.
http://www.strathmorestandard.com/2013/11/10/jimmie-johnson-all-but-wraps-up-chase-for-the-championship-title

D.  American Economist Paul Samuelson told Newsweek in 1966, “Wall Street indices predicted nine out of the last five recessions.” A teacher once said to Albert Einstein’s father, “It doesn’t matter what [Albert] does, he will never amount to anything.” Maybe attempts to predict the future are irrelevant — anything can happen. Perhaps the only certainty is what the wise Yogi Berra once said, [insert yogism].
http://www.shreveporttimes.com/article/20131103/NEWS05/311020007/


E.   As the beloved piquant paradoxical pin-striper, Yogi Berra, used to pipe – [insert Yogism], it’s precisely that, just two decades or so later, with the same old cast of characters and a few new faces added. One of the unhappy consequences of survival to an ancient age, with one’s mind intact is the remembrance of things one would prefer to have forgotten.
http://wamc.org/post/paul-elisha-reluctant-remembrances

F.  Yes, it's only Week 2. Each NFL team still has 14 regular-season games ahead of them. It's early. But that doesn't mean the stakes aren't already high, especially for teams who opened the 2013 season with a loss. History suggests -- and Yogi Berra would likely agree – [insert Yogism] for Super Bowl hopefuls starting 0-2.
http://www.huffingtonpost.com/2013/09/15/0-2-teams-falcons-packers-ravens_n_3922563.html
G.  Maybe it is the fall season and the race to the World Series that makes me think of Yogi Berra, or maybe it is the actions of my Congressman, Leonard Lance, that reminds me of one of Mr. Berra's great insights, [insert Yogism].  Over his time in Congress I have been watching and observing the Congressman's statements and actions and I guess I should not have been surprised about his most recent vote to shut down the government.  But I was.
http://thealternativepress.com/articles/lance-throws-a-change-up

H.  Remember the classic Yogi Berra line: [insert Yogism].
There is a liberal corollary, no less fatuous: When you come to a dilemma, take the path of least resistance.
http://www.lompocrecord.com/news/opinion/mailbag/the-sad-path-to-destruction/article_af82704a-272f-11e3-b8e8-0019bb2963f4.html
I.  One of my favorite quotes is from Yogi Berra: [insert Yogism].

I often wonder why most people will spend hours upon hours planning a vacation, deciding where to go, how to get there, how much to spend and how do to get the most bang for their buck. Very few people, however, will sit down with their family members and a financial coach.

J.  Dwight Howard is living proof that Yogi Berra's quote, [insert Yogism] is true in basketball as well. Howard, in his first year as center of the Houston Rockets, was video recorded shooting free throws before the Rockets' Nov. 16 home game against the Denver Nuggets.
Howard, a career 57.6 percent free-throw shooter, showed that he can hit foul shots when it doesn't count.
The video, sent in to TheStarters.NBA.com, shows the mercurial all-star making 18 of his 20 attempts, for an impressive 90 percent.
http://www.sportsworldnews.com/articles/6923/20131123/dwight-howard-free-throws-houston-rockets-center-hits-90-percent-of-foul-shots-in-practice-video.htm 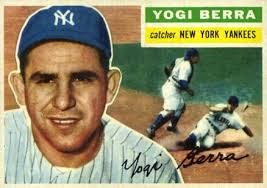 View all of my books.
Posted by Frank Rega at 9:44 AM No comments:

What's wrong with this picture?


As of this date (11/2/13) Pope Francis is still alive on earth, and we don't pray TO him, do we? We pray to God and to the saints. This prayer card is from the Companions of St. Anthony, Ellicott City, MD.  The little medal at the top right says "Pope Francis Pray for Us."


View all of my books. 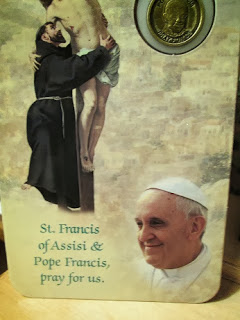 Will we see our favorite pets in heaven?

Of course!  Otherwise, it wouldn't be heaven, would it?

In a way known only to God, we will in some manner encounter our beloved animal friends, in that place of perfect happiness.

How can anyone say animals are not in heaven, when in fact they are a a little bit of heaven sent to the earth [added 01/10/2014].

If animals are not destined for heaven, why did saints preach to them?  St. Francis preached to birds, St. Anthony to fishes. [added 03/02/1918.]


View all of my books. 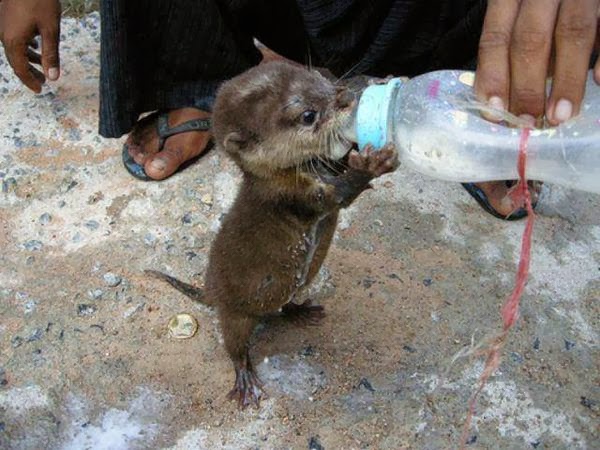