We learn this from Adam S. Miller's The North, the South, and Slavery, the second of his series four books on the civil war, written from a traditional Catholic perspective.  One might ask, how could there be anything hypocritical about setting slaves free?  The truth, however, about that famous Proclamation, is a different matter, one that those of us indoctrinated in the politically correct view of the Civil War will find difficult to accept. The fact is that, legally, not one single slave was set free by that document.

"L'Osservatore Romano [the Vatican's newspaper] condemned it as a desperate and hypocritical measure which freed no slaves but encouraged rebellion in the South.  The Jesuit Journal, La Civilta Cattolica, portrayed the war as a hopeless and unjust war to punish the South." (p. 95.)  Lincoln's Proclamation only applied to those Southern states or parts thereof that were not already controlled by Federal troops.  It did not apply to slaves in Northern or border states, nor to slaves in the areas of the South that were under Union control. It did not free any slaves in those domains; that is to say, it freed no slaves in areas under the jurisdiction of the United States.  Rather, it applied only to Confederate states or sections which were still in rebellion, and over which the North had no legal jurisdiction. Hard to believe?  Read the Proclamation yourself.

Miller writes that the implications of this should shock those who subscribe to the myth that Lincoln was a great humanitarian.  The Proclamation of 1863 was actually a war tactic, whose purpose was to encourage slaves to flee from their plantations, disrupt farm production, and join the war against the South. Lincoln wrote later that year that he hoped "the Negroes should cease helping the enemy, [and] to that extent weaken the enemy in his resistance." (p. 92.)  Shortly after it was issued, the New York World editorialized that the Proclamation "was not merely futile, but ridiculous."  The paper exposed the fact that "The President has purposely made the proclamation inoperative in all places where we have gained a military footing which makes the slaves accessible.  He has proclaimed emancipation only where has notoriously no power to execute it." (p. 94.) 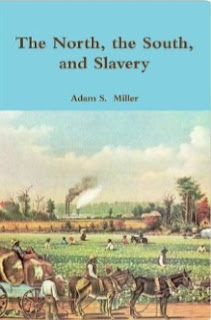 What has been presented so far is only a glimmering of the truth behind the "official" view of the Civil War and the issue of slavery in the South.  Miller's book exposes a plethora of the "Northern myths," revealing, for example, that the first slaves brought to the future United States were not Africans, but were Irish, English, and Scottish Catholics, and certain legitimate criminals, all white.  In later years, there were thousands of non-whites, including freed blacks and Indians, who owned slaves.  "Slavery in America was not strictly based on racial prejudice, since there were black masters of black slaves, and white masters of white slaves." (p. 40).  The hypocrisy of the North: by 1760 the North had at least 41,000 African slaves, and 3000 white, mostly Irish Catholic, slaves.  When the Revolutionary War broke out, New York was the second largest urban center for slavery. In the first U.S. census of 1790, there were 12,422 registered slaves in New Jersey (p. 45).

Written from a Catholic viewpoint, this work also contains sections on Church teaching on slavery, Catholic slaves and slaveholders, and even lists the many canonized slaves and even slave masters.

This short review cannot possibly enumerate the facts presented in this powerful, compact, myth-busting book.  It is not written in a sensationalist manner, nor does Miller intend to justify the immorality of slavery in any way. If you can handle a serious paradigm shift in your view of the Civil War, and are open to shedding any pre-conceived, politically-correct understanding of that conflict, I highly recommend reading this book.

The North, the South, and Slavery is the second of a projected four-part series on the Civil War by Adam S. Miller. The updated editions of the author's books are best obtained from his website http://www.lulu.com/spotlight/tower7
Posted by Frank Rega at 7:03 PM 1 comment: