On those Short-sighted individuals and critics who reject Luisa Piccarreta's Divine Will teachings.

Their greatest difficulties and most serious doubts occur because Luisa Piccarreta is called to a unique and special mission – to live in the Divine Will and make it known. But the Lord would not have composed a prayer asking that “Thy Kingdom come, thy Will be done on earth as it is in heaven” if it already existed on earth. It says “come,” and He would not have composed this prayer unless He wanted to obtain its effects. In order to reach this, could He not choose a woman to confound the infernal serpent, as He had chosen His mother to effect the Redemption?

This was the reason for all the Lord's preparations, visits, graces and communications to Luisa Piccarreta. But it raises doubts and difficulties, and simply sounds bad, when people read that among so many great saints in the history of the Church, none except for Jesus and Mary, have lived in the Kingdom of the Divine Will. Then they read that He is placing Luisa near the Sovereign Queen so that she can imitate the way Mary lived in the Divine Will. He places Luisa in Mary's hands, so that she can be guided and assisted by her, to be a copy that resembles her. That Luisa might imitate Mary in everything seems so absurd to them, and in a sinister manner they make it sound as if Luisa was to become another Mary. But the Lord wants Luisa similar to her, in the way that He wants souls dear to Him to be similar to Him, but this does not mean to become God like He is. He does not say Luisa is like the Celestial Queen, but similar to her. 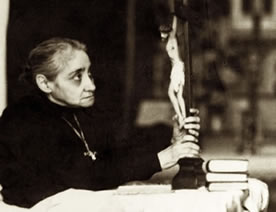 But time will reveal everything, and just as they can't deny that the Virgin of Nazareth is the Mother of Jesus, so will they not be able to deny that Luisa has been elected for the sole purpose of making the Divine Will known. Through her He will obtain that “Thy Kingdom come” will have its fulfillment. Creatures are instruments in the Lord's hands, and He does not look at who they might be, but whether they can fulfill His highest designs. In due time, He makes use of the doubters and their difficulties to confound and humiliate them.

From their way of thinking, it shows that they have only considered the person of Luisa, and have not calculated what the Divine Will can accomplish. It knows how to operate, and if it decides to work in one creature in order to fulfill its greatest designs in the midst of humanity, it lets no one dictate to it the conditions – who that person can be, nor the time, nor the way, nor the place. Rather, the Divine Will acts in an absolute way. Nor does it pay attention to certain short-sighted critics, who are not able to elevate their minds to the divine and supernatural order. Nor can they bow their forehead before the incomprehensible works of their Creator. While they want to reason with their own human reason, they lose the divine reason, and remain confounded and incredulous.

But who am I to judge such critics as being short-sighted? Who do I think I am to say that they are incapable of raising their minds to the supernatural order? Well, it is not I who make these statements, but they were made by the Lord Himself. The above paragraphs are a paraphrase of what Jesus told Luisa, as reported in her books of revelations, Volume 29, on May 19, 1931. View my Luisa Piccarreta books and others HERE