If your eye causes you to sin...

St. Francis preaches to the Muslim leader, Sultan Al-Kamil in 1219, during the Fifth Crusade. An excerpt from my book St. Francis of Assisi and the Conversion of the Muslims, TAN Books, 2007, pp. 68-69.


Al-Kamil made another attempt to test St. Francis, this time in the matter of the Gospel teachings of Christ. This incident shows that he had some familiarity with Christian doctrine, perhaps based on what had already been preached to him by Francis. The sheik confronted the friar with the words from Jesus’ Sermon on the Mount, recounted in the Gospel of St. Matthew:
"But I say to you not to resist evil: but if one strike thee on thy right cheek, turn to him also the   other: And if a man will contend with thee in judgment, and take away thy coat, let go thy cloak also unto him." (Matthew 5: 39-40.)


The sultan asked Francis why, in the light of this teaching of Jesus, should Crusaders be invading the lands of the Muslims? Since the passage teaches “turning the other cheek” and repaying evil with good, the sultan was contending that there was no justification for the Crusader invasions, even though he knew that the Muslims had taken the land by force from the Christians centuries earlier.
Once again the response of Francis surprised al-Kamil. He declared that the sultan had not completely studied the Gospel, and pointed out to the king the words Jesus had spoken earlier in the same discourse: 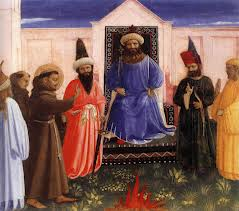 Did St. Francis teach: preach the Gospel, use words if necessary?

Actually, he did teach this, but true to form, he did not use words to do so.


As others have often pointed out, there is no record that he literally said "preach the Gospel, use words if necessary" (good summary here).  Or, to paraphrase a certain famous baseball player, "He never really said everything he said."  But he did say it without words.

The following anecdote from a 13th century biography of the saint, written shortly after his death, is the most probable source of this legendary remark attributed to St. Francis.

Of the sermon Francis preached more by example than by words.

Repeatedly asked by his vicar to preach the word of God to his daughters [Poor Clare nuns] when he stopped off for a short time at St. Damian's, Francis was finally overcome by his insistence and consented. But when the nuns had come together, according to their custom, to hear the word of God, though no less also to see their father, Francis raised his eyes to heaven, where his heart always was, and began to pray to Christ.

He then commanded ashes to be brought to him and he made a circle with them around himself on the pavement, and sprinkled the rest of them on his head. But when they waited for him to begin, and the blessed father remained standing in the circle in silence, no small astonishment arose in their hearts.

The saint then suddenly rose and to the amazement of the nuns, in place of a sermon he recited the Miserere mei Deus [Psalm 50 (51) “Have mercy on me, O God, according to thy great mercy. And according to the multitude of they tender mercies blot out my iniquity. . . ”]. When he had finished, he quickly left.

The Servants of God were so filled with contrition because of the power of this symbolic sermon that their tears flowed in abundance and they could scarcely restrain their hands from inflicting punishment on themselves. By his actions he taught them that they should regard themselves as ashes and that there was nothing in his heart concerning them but what befit this consideration.

This was the way he acted toward these holy women; his visits to them were very useful, but they were forced upon him and rare. And this was his will for all his brothers: he wanted them to serve these women in such a way for Christ, whom they serve, that like them that have wings they would always guard against the snare laid out for them.

Were Adam and Eve originally clothed in garments of light?


The Word of God says this of our first parents while they were in Paradise, before the fall:  “And they were both naked: to wit, Adam and his wife: and were not ashamed,” (Genesis 2:25 Douay-Rheims).

That this nakedness refers to the absence of material, physical garments is made clear in subsequent passages, after the fall:
“And the eyes of them both were opened: and when they perceived themselves to be naked, they sewed together fig leaves, and made themselves aprons,” Genesis 3:7.
“And the Lord God made for Adam and his wife, garments of skins, and clothed them,” Genesis 3:21.

Although they had been "naked" in Paradise in the literal sense of the word, is it possible that in a figurative sense, on another level of meaning, they were clothed in some supernatural way before the fall? The answer is yes, according to two noted mystics of the Church, who lived a century apart and came from different cultures. The revelations granted to these two mystics bear a striking correspondence. They both assert that our first parents, Adam and Eve, were originally clothed in beams and rays of light, a divine radiance.

Certainly no Catholic is required to believe in any private revelations, but if what is presented below is in fact true, it indicates just how far mankind has fallen. 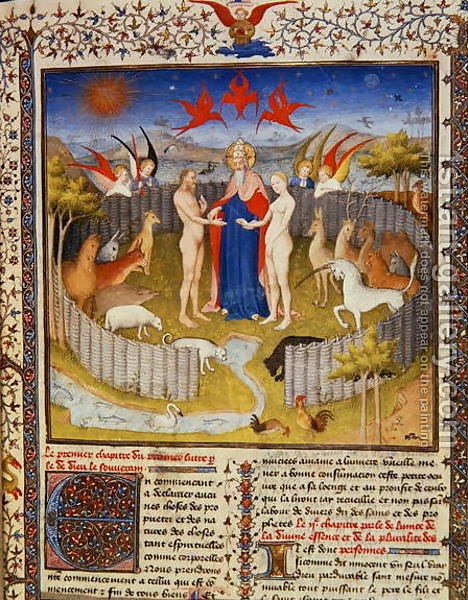 Revelations to Blessed Anne Catherine Emmerich of Westphalia, Germany (1774 – 1824), from her four-volume Life of Jesus Christ and Biblical Revelations. (TAN Books, or online here).  The following is from Chapter Three of the first volume.


They were like two unspeakably noble and beautiful children, perfectly luminous. and clothed with beams of light as with a veil. From Adam's mouth I saw issuing a broad stream of glittering light, and upon his forehead was an expression of great majesty. Around his mouth played a sunbeam, but there was none around Eve's. I saw Adam's heart very much the same as in men of the present day, but his breast was surrounded by rays of light. In the middle of his heart, I saw a sparkling halo of glory. . . . .
From the hands and feet of Adam and Eve, shot rays of light. Their hair fell in five glittering tresses, two from the temples, two behind the ears, and one from the back of the head.
. . . .
The glittering beams on Adam's head denoted his abundant fruitfulness, his glory, his connection with other radiations. And all this shining beauty is restored to glorified souls and bodies. Our hair is the ruined, the extinct glory; and as is this hair of ours to rays of light, so is our present flesh to that of Adam before the Fall. The sunbeams around Adam's mouth bore reference to a holy posterity from God, which, had it not been for the Fall, would have been effectuated by the spoken word. Adam stretched forth his hand to Eve. They left the charming spot of Eve's creation and went through Paradise, looking at everything, rejoicing in everything. That place was the highest in Paradise. All was more radiant, more resplendent there than elsewhere.

Our Lord, making Himself seen by Luisa, told her that during His Passion, He felt an immense pain in the depths of His Heart, when they divided His garments and cast lots for His tunic. It was hurtful seeing this tunic used for a game, since it was the only object that He possessed that had been given to Him by His Mother.

He was further transfixed because in those garments Adam came to His mind, still clothed in the garment of his innocence, and inseparable from the Supreme Will. At his creation, Adam was dressed with a tunic comprised of the interminable light of the Divine Will – a garment that could not be debased, divided or decomposed. It was the outer garment of innocence.

Jesus explained to Luisa that in creating man, He placed him in the sun of the Divine Will. This was a garment of shining light, whose rays covered his body in a way that honored him and rendered him beautiful. To say that Adam was truly naked prior to sinning is simply not correct. Since all that God created was adorned and covered, should not man, the jewel of Creation, have been adorned in the most beautiful way? It was appropriate that he possessed the garment of the light of the sun of the Divine Volition. Since he was adorned with this garment of light, he had no need of material garments in order to cover himself.

But in Eden, Adam divided and gambled away his garments of innocence, the clothing of the Divine Will. As Adam withdrew from the Divine Will, the light from his body and soul withdrew, and he lost his vesture of divine radiance. Realizing he was no longer surrounded by light, he felt nude and ashamed, and made use of material things to cover himself.
In seeing from the Cross His own garment divided and lots being cast for His tunic, that which Adam did at Eden was repeated before His eyes. His pain, upon seeing this, brought forth a lament. How many creatures, doing their own will, make a game of the Divine Will, and how many times do they divide the garment of innocence with their passions?

Subsequent to His immense sorrow at seeing His own garments divided and cast for lots, He did not take on other garments upon His Resurrection. Instead His Humanity was dressed with the shining garment of the sun of the Supreme Will. Then, clothed in these regal garments, He presented Himself to His Celestial Father, and opened heaven to all the redeemed. The Divine Will, while it is life, is also man's true garment of Creation.

Upon hearing this, Luisa asked Jesus why He and His Mother, who also possessed the Divine Will, did not appear clothed in its light while on earth? The Lord explained that His Humanity was to represent fallen Adam, and not innocent Adam. Besides, if they were dressed in the light of the Divine Fiat, who would have dared to even go near them? At the time of His Passion, who would have dared touch Him? But when He rose from death, then He represented the new Adam, and He suspended the miracle which had kept the divine light hidden from His Humanity. Dressed in the purest light of this regal and dazzling garment, He entered into the Fatherland, in order to allow anyone that followed Him to also enter (12/12/1926).

The above overview of Luisa's revelation written that day, will be included in my third volume of The Life of Luisa Piccarreta, Journeys in the Divine Will.