Separation of Church and State? Never!

In the light of the many confusing and modernist notions that have emanated from Rome since the Second Vatican Council, it is useful to turn to approved and classic works dealing with various aspects of true Catholic doctrine. For that reason I have re-read Fr. Denis Fahey's The Social Rights of Our Divine Lord Jesus Christ the King, which I first studied in 1990. This book was originally published, with Imprimatur, in 1932, and was adapted by Fr. Fahey from an earlier work in French by the Rev. A. Phillipe. In essence, it expounds the Catholic doctrine on the rights of Our Lord Jesus Christ in society.


The following quotes demonstrate the logical progression of Fahey's thought.  They are from the first section of the book, Chapters 1 through 6, which deal with the fundamental doctrine on Church and State. Subsequent chapters are concerned with the errors introduced into the modern mentality by the “Declaration of the Rights of Man” of 1789, and of ways to remedy them.


“Now the first truth – on which all others depend, and which imposes obligations on the creature – is that of the sovereign dominion of God over every creature and the absolute dependence of every creature on God.”


“We can never lose sight of the fact that man is placed on earth to prepare for eternal happiness. All institutions, divine or human, have for their last end the glory of God and the salvation of souls”


“The constitutions of nations, their legislation . . . must like everything else, on account of this last end, be in conformity with the Eternal Law of God, with the Creed and with the Ten Commandments.”


“The Sovereign Pontiffs have always taught that there should be a perfect understanding between Church and State. The reason of this is simple enough: Church and State are two institutions established by God.”


“Pius IX and Leo XIII have explicitly condemned the doctrine of the separation of Church and State.”   [Pius IX's Syllabus of Errors and Leo XIII's Immortale Dei and Libertas, are quoted in later chapters of the book.]


“Public homage of adoration and love, thanksgiving and reparation, is in fact owing to Christ in His Godhead. This homage is laid upon Christ as man, and upon all men by Christ as King.”


“It belongs then to His kingship to lay upon men and upon human society those various kinds of spiritual worship, for they are the only means, both for man and for society, to attain their final end, union with God in the Three Divine Persons.”


“The Divine Master wants His Church to be in the world the instrument for the salvation of souls.”
“Every Society then must obey the Church as Christ Himself, for the Church is commissioned to explain His mind and will just as much to men gathered in society as to the individual.”


A nod to the late Fr. Luigi Villa for inspiring the title of this post.
Posted by Frank Rega at 2:32 PM No comments:

Thy Kingdom come, Thy Will be done.

Theologian Stephen Patton (M.A. Franciscan University) has been one of the foremost defenders of the orthodoxy of the writings on the Divine Will transcribed by the Servant of God, Luisa Piccarreta (1865 – 1947). It was his 1999 monograph on these revelations that successfully responded to the doctrinal objections that had been raised during that decade by many well-meaning critics, including a handful of priests. Now he has expanded on his original work by tackling some of the weightier theological issues raised in Piccarreta's writings. In his new book, which he terms a “study guide,” he attempts to answer any lingering concerns about the compatibility of her work with Catholic doctrine, especially regarding the terminology and expressions that she uses.


Some indications of a more favorable climate in which one can study her writings include the positive assessment of her work given in 2010 by two theologians appointed by the Holy See, the canonization of her spiritual advisor St. Annibale Di Francia, and the recent acceptance by the Pontifical Gregorian University of a doctoral thesis defending her work. In addition, now for the first time a book explaining Luisa Piccarreta's teaching on the Divine Will has been officially cleared for Catholic readers, with the granting by the Diocese of Sacramento of the Nihil obstat and Imprimatur on this important study by Stephen Patton. However, the author advises that while the book “does not contain matter contrary to the Catholic faith and morals, still, these official marks should not be understood as an official adoption or endorsement by the Church of Luisa's writings.” 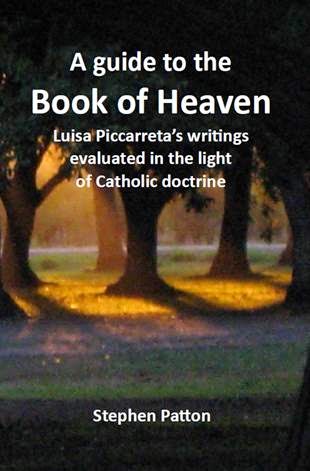 Stephen Patton, A Guide to the Book of Heaven, Luisa Piccarreta's writings evaluated in the light of Catholic doctrine (2013, Jacksboro TN).  This book can be obtained via the Luisa Piccarreta Center for the Divine Will, 423-566-5178 or email tomfahy@comcast.net.  Coming soon to Amazon.com as well. The complete review of Mr. Patton's book can be read at this link.

Luisa Piccarreta demonstrated an extraordinary level of obedience to the priests and spiritual directors who guided her, giving them authority even over the voice of Jesus that she heard in her visions. She was born in southeastern Italy in the small town of Corato. Luisa had little formal education, was graced with the invisible stigmata, and for most of her adult life was bedridden, and lived almost exclusively on the Holy Eucharist. During a period of nearly 40 years, under obedience from her Confessors, she kept a diary of her intimate visions and communications with Jesus, Mary, and certain saints. The diary comprises 36 volumes, and the title given to this opus by Jesus Himself is: Book of Heaven – the Call of the Creature to Return to the Order, to the Place, and to the Purpose for Which it was Created by God.” The first 19 volumes were officially approved by her Bishop's Imprimatur, for which St. Annibale Di Francia granted the nihil obstat. The purpose of these revelations, as explained to her by the Lord, is to reestablish the Kingdom of His Divine Will on earth and in souls, as it existed before man's fall from grace. 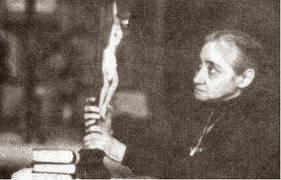