I have been enjoying Jeanette Salerno's newest book, Padre Pio's Christmases, a delightful collection of factual encounters with Padre Pio and the Baby Jesus.  The book also includes my translation of St. Pio's Christmas Meditation, which appears in the Italian edition of Volume IV of the letters of the saint.  Jeanette and I thought it would be appropriate to blog this beautiful rendition of the Christmas story, so that the lessons Padre Pio delineates can bring joy, comfort and light to as many people as possible.

The Gospel is to be preached to the Jew first.

The Gospel is to be preached to the Jew first.

Recently I posted on my blog the words of Our Lord Jesus Christ to St. Francis of Assisi: “Go and repair my house which as you see is falling completely into ruin.” Currently there is an urgent need to repair the Church's attitude towards converting the Jews.

St. Paul wrote that we should not be ashamed of the Gospel, for it brings salvation to those who believe, to the Jew first. “For I am not ashamed of the gospel. For it is the power of God unto salvation to every one that believeth, to the Jew first, and to the Greek.” [Romans 1:16]. Here St. Paul clearly indicates that the Gospel is not simply meant for Jews and others, but is for the Jew first. Yet the new document issued by the Vatican's Commission for Religious Relations with the Jews states that “. . . the Catholic Church neither conducts nor supports any specific institutional mission work directed towards Jews.”

This may be true now, but it was not so in the past.

In the 19th Century two brothers converted from Judaism to Roman Catholicism, and with the blessing and permission of three Popes labored for the conversion of the Jews. These brothers, Alphonse and Theodore Ratisbonne were both ordained as Catholic Priests. Fr. Alphonse Ratisbonne, with the consent of Pope Pius IX, left the Jesuits in order to labor for the conversion of Jews and Muslims. Pope Gregory XVI specifically granted Fr. Theodore Ratisbonne's request to seek the conversions of Jews to the Church, and Pope Leo XIII appointed him prothonotary Apostolic. Both brothers founded schools and societies dedicated to the education and conversion of Jewish children. The Congregation of Our Lady of Sion which the brothers established for both priests and sisters still exists, but unfortunately since Vatican II their mission is no longer the conversion of Jews; rather it is “to witness in the Church and in the world that God continues to be faithful in his love for the Jewish people and to hasten the fulfillment of the promises concerning the Jews and the Gentiles." (Constitution, article 2). 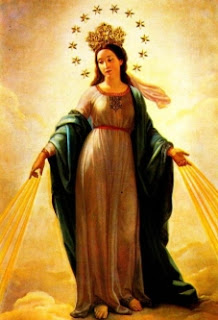 The Jew Alphonse Ratisbonne was miraculously converted to the Faith while praying before this image of Our Lady at the basilica of St. Andrea delle Fratte in Rome, in 1842.

Below is source material from the traditional Catholic Encyclopedia.

Fr. Alphonse Ratisbonne:
“After his conversion he assisted his brother, Theodore, in founding the Sisterhood of Our Lady of Sion in 1843, was ordained priest in 1847, and entered the Society of Jesus. Desirous, however, to devote himself entirely to the conversion of the Jews, he left the society with the consent of Pius IX, transplanted the Sisters of Sion to Jerusalem in 1855, and built for them in 1856 the large Convent of Ecce Homo with a school and an orphanage for girls. In 1860 he erected the Convent of St. John on the mountain at Ain Karim, together with a church and another orphanage for girls. Here Alphonse laboured with a few companions (Pères de Sion) for the conversion of Jews and Mohammadens until his death. For boys he erected the orphanage of St. Peter, near the Gate of Jaffa outside of Jerusalem, with a school for mechanical arts in the city.”

Fr. Theodore Ratisbonne:
"It was whilst in this city, in 1842, that his brother Alphonse, a free-thinker animated with greatest hatred against Christianity, was miraculously converted at Rome, and suggested to him to secure a home for the education of Jewish children. Providence seemed to design him for the work, and answered his prayer for light by sending him the two daughters of a Jewish lady whom he subsequently converted. During the same summer he went to Rome; Gregory XVI decorated him a Knight of St. Sylvester, complimented him for his "Life of St. Bernard", and granted his request to labour for the conversion of the Jews. Houses were opened under the patronage of "Our Lady of Sion" for the Christian education of Jewish boys and girls. Pius IX gave Ratisbonne many marks of his affection, and Leo XIII appointed him prothonotary Apostolic. At his death he received the last Sacraments from the Archbishop of Paris, and the final blessing from Leo XIII."

The Lord spoke to St. Francis, "Go, and repair my house, which as you see is falling completely into ruin!"


It was St. Francis who crossed the battle lines during the Fifth Crusade in order to try to convert the Muslims to Christ and His Church, setting an example which is unheeded today.  Not only are we not to "proselytize," but in just what condition is the Church to which one should be converted?  Today the Church is being torn by Progressivist laxity on the one hand, and those trying to preserve traditional Roman Catholicism on the other.  The words the Lord spoke to St. Francis over 800 years ago seem to be more relevant and urgent now than they were then.  As to what specifically must be done to "repair" His House, I will leave that to your comments below.

"Francis left the town one day to meditate out-of-doors, and as he was passing by the church of San Damiano which was threatening to collapse with age, he felt urged to go in and pray.  There as he knelt in prayer before a painted image of the Crucified, he felt greatly comforted in spirit and his eyes were full of tears as he gazed at the cross.  Then, all of a sudden, he heard a voice coming from the cross and telling him three times, "Francis, go and repair my house.  You see it is all falling down."
Francis was alone in the church and he was terrified at the sound of the voice, but the power of its message penetrated his heart and he went into an ecstasy.  Eventually, he came back to himself and prepared to obey the command he had received.  He was quite willing to devote himself entirely to repairing the ruined church of San Damiano, although the message really referred to the universal Church which Christ "won for himself at the price of his own blood" (Acts 20:28), as the Holy Spirit afterwards made him realize and he himself explained to the friars."
(St. Bonaventure, Major Life of St. Francis, circa 1263 A.D., Chap. II, no. 1).

". . . while he was walking near the church of San Damiano, an inner voice bade him go in and pray.  He obeyed, and kneeling before an image of the crucified Savior, he began to pray most devoutly.  A tender, compassionate voice then spoke to him: "Francis, do you not see that my house is falling into ruin?  Go, and repair it for me."  Trembling and amazed Francis replied: "Gladly I will do so O Lord."  He had understood that the Lord was speaking of that very church which, on account of its age, was indeed falling into ruin.
These words filled him with the greatest joy and inner light because in spirit he knew that it was indeed Jesus Christ who had spoken to him.  On leaving the church he found the priest who had charge of it sitting outside, and taking a handful of money from his purse, he said: "I beg you , Sir, to buy oil and keep the lamp before this image of Christ constantly alight."
(Legend of the Three Companions, circa 1246 A.D., Chapter V). 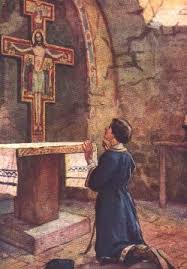 "Changed now perfectly in heart and soon to be changed in body too, he was walking one day near the church of St. Damiano, which had nearly fallen to ruin and was abandoned by everyone.  Led by the Spirit, he went in and fell down before the crucifix in devout and humble supplication; and smitten by unusual visitations, he found himself other than he had been when he entered.  While he was thus affected, something unheard of before happened to him:  the painted image of Christ crucified moved its lips and spoke.  Calling him by name it said: "Francis, go, repair my house, which as you see is falling completely to ruin."
Trembling, Francis was not a little amazed and became almost deranged by these words.  He prepared himself to obey and gave himself completely to the fulfillment of this command.  But since he felt that the change he had undergone was beyond expression, it is becoming that we should be silent about what he could not express.  From then on compassion for the Crucified was rooted in his holy soul, and, and it can be piously supposed, the stigmata of the venerable passion were deeply imprinted in his heart, thought not as yet upon his flesh."
(Thomas of Celano, Second Life of St. Francis, circa 1247 A.D.,  Chapter VI, no. 10). 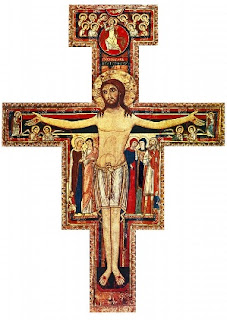 "The church of San Damiano seemed to be collapsing from old age, already beyond repair, desolate, without devout worshipers and without prayers . . . . The painted wooden image of the Crucified Lord that hung by the altar had survived all that decay - an image of goodness and suffering, expressing with extraordinary vividness both martyrdom and love.  One day, going up to the city, Francis went into the church, knelt, and began to pray.  He asked to be given light in the midst of all his darkness, to know the divine will, in accordance with the promise made during the night in Spoleto.
Suddenly it seemed to him that Jesus' gaze was fixed on him.  There was no doubt about it.  Those eyes had become animated, taken on life.  They were speaking and expressing a burning passion.  And, as in the night of the vision of the enchanted castle, the cavalier consecrated to a high undertaking distinctly heard his name being called.  The words fell like a whisper, a light sigh, scarcely perceptible.
"Francis, go and repair my house, which, as you see, is falling into ruin."  After a short pause, the sad call was repeated for the second time, and for the third time.  Francis got up, frightened.  The church was again sunk into a silence without beginning or end.  He went out, sought the old priest who had custody of the place, and offered him all the money he had with him so that he might relight the lamp before the crucifix.
Then he rushed up to Assisi.  He went to the shop [of his father] and took down some scarlet, the noblest and most expensive cloth that then existed, used for making mantles suitable for the grandeur of kings and elaborate gowns with trains for beautiful women.  Francis wanted to use it to cover the poor abandoned church in sumptuous purple."
(Arnaldo Fortini, Nova Vita di San Francesco, 1959, trans. by Helen Moak, Chap. 6.  Fortini was mayor of Assisi for 20 years, and his 800 page book is considered the most authoritative of the modern biographies.)