Meditating on Our Lord's Passion and Death

In my admittedly biased view, there is no greater, more inspirational, more fruitful, more important way to meditate on Our Lord's Passion during Lent than by reading Luisa Piccarreta's Hours of the Passion of Our Lord Jesus Christ.


Our Lord told Luisa: “Oh, how I would love that even one single soul for each town did these Hours of my Passion! I would hear Myself in each town, and my Justice, greatly indignant during these times, would be placated in part.”


After Luisa Piccarreta had been living continuously the Hours of the Passion for over thirty years, Saint Hannibal Maria Di Francia, who had been appointed as the Ecclesiastical Censor for all her writings, commanded her under Holy Obedience to put them into writing. Seeing the wealth of its content and glimpsing all the good that they would do to our souls, Saint Hannibal began having the Hours of the Passion of Our Lord Jesus Christ printed. One chapter is devoted to each of the 24 hours (events) of His Passion in chronological order.


This book has Church approval and in fact received the Imprimatur and Nihil Obstat six separate times between 1915 and 1938, in both Italian and German editions. 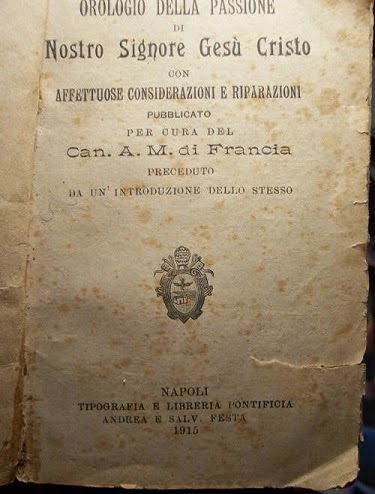 
Another time I was lamenting to Jesus, because after so many sacrifices to write these Hours of the Passion, very few were the souls who were doing them. And He: “My daughter, do not lament - even if there were only one, you should be content. Would I not have suffered my whole Passion even if one soul alone were to be saved? The same for you. One should never omit good because few avail themselves of it; all the harm is for those who do not take advantage of it. And just as my Passion made my Humanity acquire the merit as if all were saved, even though not all are saved, because my Will was to save everyone, and I received merit according to what I wanted, not according to the profit which creatures would draw; the same for you: you will be rewarded depending on whether your will was identified with my Will in wanting to do good to all. All the harm is for those who, though being able to, do not do them. These Hours are the most precious of all, because they are nothing less than the repetition of what I did in the course of my mortal life, and what I continue to do in the Most Holy Sacrament. When I hear these Hours of my Passion, I hear my own voice, my own prayers. In that soul I see my Will - that is, wanting the good of all and repairing for all - and I feel drawn to dwell in her, to be able to do what she herself does within her. Oh, how I would love that even one single soul for each town did these Hours of my Passion! I would hear Myself in each town, and my Justice, greatly indignant during these times, would be placated in part.” Oct. 1914, vol 11.


Some of the above information came from this web site: http://www.passioiesus.org/en/horasdelapasion/que_son.htm


Online versions of the Hours are available at the above website and also at http://catholicdivinewill.blogspot.com/2008/06/twenty-four-hours-of-passion.html
Check Amazon.com for printed copies.


Nota Bene: I have been informed that an authoritative source states that the Hours of the Passion are not included in the so-called moratorium on publishing Luisa's writings. The Archbishop responsible for the Cause of the Beatification of Luisa Piccarreta has issued the moratorium, pending final Church approval of her books and the appearance of an official translation. https://docs.google.com/file/d/0BzO24tYoe_9TLW1QZUsxN21rVWc/edit?pli=1

Posted by Frank Rega at 8:34 PM No comments:

On Cardinal Burke's call for resistance

According to Pope Pius XII, no Catholic can resist or oppose the teaching of a Pope once it becomes official (is entered in the Acta Apostolicae Sedis). If Pope Francis officially approves, as a result of the upcoming Synod on the Family, that the divorced and remarried, or those living in irregular unions, can receive Communion, and enters this in the Acta, then no Catholic can legitimately resists this teaching.

Pope Pius XII in Humani Generis:
"But if the Supreme Pontiffs in their official documents purposely pass judgment on a matter up to that time under dispute, it is obvious that that matter, according to the mind and will of the Pontiffs, cannot be any longer considered a question open to discussion among theologians."

On the other hand, Cardinal Burke has famously announced his reaction, if Pope Francis insists on his progressive path regarding Communion: "I will resist. I cannot do anything else. " Link.  Others are supporting  Burke's stance, saying they too will resist: See e.g.

But as stated so clearly by Msgr. Joseph Clifford Fenton in the American Ecclesiastical Review :
"Thus, according to the clear teaching of the Humani generis, it is morally wrong for any individual subject to the Roman Pontiff to defend a thesis contradicting a teaching which the Pope, in his "Acta," has set forth as a part of Catholic doctrine.  It is, in other words, wrong to attack a teaching which, in a genuine doctrinal decision, the Sovereign Pontiff has taught officially as the visible head of the universal Church.  This holds true always an everywhere, even in those cases in which the Pope, in making his decision, did not exercise the plenitude of his apostolic teaching power by making an infallible doctrinal definition."

Consequently, if one still feels compelled to resist an official papal teaching in accordance with one's personal Sensus Catholicus, then the only intellectually honest approach would be to consider that such a pope, who one believes officially errs in a matter of faith or morals, must be a false pope.  For a brilliant and clear explanation and discussion of this approach, see this article.

St. Padre Pio:  "Do not cease in seeking the truth or in acquiring the greatest good.  Be docile to the impulse of grace, following its inspirations.  Do not be ashamed of Christ or his doctrine. "

The Church flowed from the Second Vatican Council?

Archbishop Vincenzo Paglia on Archbishop Oscar Romero:
“He was killed at the altar,” Archbishop Paglia said, instead of when he was an easier target at home or on the street. “Through him, they wanted to strike the Church that flowed from the Second Vatican Council.”
http://www.catholicsun.org/2015/02/04/archbishop-romeros-beatification-will-be-soon/

From another news article:
Archbishop Vincenzo Paglia, the Vatican official who is leading Romero's sainthood cause, put it this way Wednesday: Romero was "a martyr of the church of the Second Vatican Council." The Salvadoran's murder, Paglia said, was part of a "climate of persecution against a pastor that followed the evangelical experience, the documents of the Second Vatican Council, of Medellin [and] had chosen to live with the poor to defend them from oppression."
http://ncronline.org/news/vatican/vatican-oscar-romero-martyr-church-second-vatican-council

This is all very telling.  Archbishop Paglia has perhaps inadvertently exposed and revealed what is at the root of the crisis in the Church today, when he speaks of the "Church of the Second Vatican Council."  What is the difference between a Church that flowed from and was defined by the Second Vatican Council, vs. the Church was born of the blood of the Sacred Heart of Jesus on Calvary?  The Church formed by Jesus is concerned with the glory of God and the salvation of souls.  That of the Council is concerned with man's well-being in the material world - more with the poverty of "things" than with poverty of spirit; more concerned with man being accepted by others than being accepted by God.  One Church seeks the conversion of all men to the true faith, and opposes the worship of false gods.  The other Church teaches that the Triune God of the Christians is the same as that of Islam (who has no Son), and therefore dialog and not conversion is the appropriate approach. 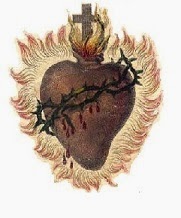 Here is what St. Augustine had to say about the former:

"When He slept on the Cross, He bore a sign, yea, He fulfilled what had been signified in Adam: for when Adam was asleep, a rib was drawn from him and Eve was created; Genesis 2:21-22 so also while the Lord slept on the Cross, His side was transfixed with a spear, and the Sacraments flowed forth, John 19:34 whence the Church was born. For the Church the Lord's Bride was created from His side, as Eve was created from the side of Adam. But as she was made from his side no otherwise than while sleeping, so the Church was created from His side no otherwise than while dying."   St. Augustine.
http://www.newadvent.org/fathers/1801127.htm

Nota Bene: This post is not about the martyrdom or non-martyrdom of Romero.   It concerns Abp. Paglia's statement about the church that flowed from the Second Vatican Council.  It is an admission that the Vatican II Church is not the same as the one that preceded it.
Posted by Frank Rega at 10:14 AM 7 comments: