Padre Pio and the Anglican Minister - Partners in Healing

As the Reverend Eric Fisher laid his healing hands upon the infirm leg of Alice Jones, she was astonished to see his face transform into the face of Padre Pio

The Reverend Eric Fisher is an active Anglican priest of the Church of England, who has dedicated his life and ministry to the healing of suffering souls and bodies. He wrote of his experiences in his best-seller from 1993, Healing Miracles. It was in the early 1970's, not long after being advised by his bishop that his role in the Church would be the healing ministry rather than parish work, that he first came to hear about Padre Pio. While he was at the home of experienced Anglican healer, Mary Rogers, in order to seek her advice, an Italian lady arrived. She often called on Mary when she visited from Italy. Noting that she was quite uncomfortable in his presence, Fr. Fisher discretely left the room for a short time. Upon his return, the Italian woman told him that her being disturbed at his presence in the room was nothing personal – she had an aversion to all priests. That is, all but one. “There is only one that I like and that is Padre Pio.”
After that incident, Fr. Fisher was moved to read and learn more about this Padre Pio. Since then, he has come to consider Padre Pio his “brother in the spirit,” and has been aware of his assistance on many occasions during his healing sessions. Of course, Fr. Fisher understands that it is Jesus Christ that is the ultimate healer. He feels that while the healing of ailing bodies is good in itself, it is the healing of hearts and minds that is the truly important objective.

In 1980, he was part of a mission team that was sent out to Haydock, which is near Liverpool. They were each asked to visit certain people that were on the local vicar's sick list. Among those assigned to Fr. Fisher was a middle-aged school teacher named Alice Jones, who lived with her husband in a modest home near the center of town. On his first visit, he found her tearful and depressed, and in a bitter state of mind. Alice could no longer experience any sensation in her left leg. Her left foot was twisted to one side, and her spine was out of alignment. Seven years before, while lifting some tables for a school function, she tripped and fell, seriously injuring her hip. Her back hurt since that time, and she had undergone a major spinal fusion operation, whereby bone from her hip was grafted onto her spine. She could barely walk, only with great difficulty, with the aid of elbow crutches, and by means of a splint which lifted her left foot slightly off the ground. The pain was intense, and she controlled it by an excessive use of alcohol and drugs. Like some others who had undergone a fusion operation, she felt she was on her way to becoming an alcoholic. The State had assessed her as one hundred percent disabled.

Before this visit to Alice, Fr. Fisher said a special prayer to Padre Pio from a novena prayer card, asking for his protection and support. He had also distributed these cards after morning Mass. They featured a picture of the saint, and gave an account of his austere life of service. Although Padre Pio had already passed on, the Anglican priest frequently prayed for his assistance.

Upon seeing Alice that first time, he began with a prayer for her and all the sick of the parish. Then he laid his hands on her back, running them up and down along her spine. Since her accident, her back had always felt icy cold, but surprisingly she now felt a sudden warm glow, which flowed down her spine and all around her. Fr. Fisher continued with his laying on of hands for about fifteen minutes, but then stopped. At the time he did not know why he ceased, but later became certain that it was Padre Pio protecting him from putting too much pressure on the spine, which might have affected the spinal fusion. After leaving the Jones' residence, and during a church service that evening, he asked Padre Pio for a miracle. 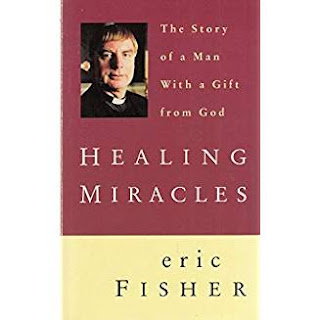 Returning to Alice's home the next day, he found her in a better state of mind and not as bitter, but she did not show any marked optimism or expectation. Fr. Fisher started again on her spine, and then began to treat her infirm left leg. He was curious as to why she had no sensation in it, since it seemed her calf muscles had not deteriorated. Then she abruptly exclaimed that she could feel “pins and needles” in a part of her leg, which also felt hot. She gradually experienced these sensations throughout the whole limb, even down to her twisted left foot. Then the priest concentrated his healing efforts on her ankle and foot, until it gradually straightened out and could rest flat on the floor. These changes were not accompanied by intense pain, although the operated part of the spine was probably affected.
Finally it was time for her to try and walk. Father urged her to try, but she insisted that she could not walk. Finally, after a seeming eternity, she raised herself up. Sobbing with joy, she began to hobble across the room. There was a deep silence felt throughout the house, and in his book Fr. Fisher wrote that it was similar only to what he “experienced on the rare occasions when something tremendous was happening.”

Later that same evening Alice Jones told Father something that, unknown to him, was occurring during the healing process. She said that when she looked down upon him, she saw superimposed upon his face, the visage of an older man with a beard. Thinking it was a hallucination, she tried opening and closing her eyes, but the strange old personage was still there. Then she saw the old man, dressed in a monk's habit, standing by her side. He seemed to take over. She could hear Fr. Fisher's voice, but she also heard the older man speaking in a foreign language. He blessed her twice with the sign of the Cross, while repeating “Gesu`, Maria; Gesu`, Maria.” With a great feeling of love and warmth, he took her arm, telling her to get up and walk in the name of Jesus. When she heard the voice commanding her to walk, her old fears of falling returned. But the word “walk” reverberated around in her head, and as it did, she gained a sense of confidence and faith, and overcame her fear of failure. She was utterly amazed that she could walk across the room to the door, and return to her chair! By then the old man had disappeared from her view; her pain and discomfort were gone, and once again she saw the face of Fr. Fisher.

Everyone was in an emotional state, and her daughter Lesley was in tears. Lesley has become aware of a strong smell of perfume. Her baby son had been having sleeping problems since birth, and she felt compelled to stand with him behind her mother's chair. She experienced the sensation of being wrapped in a warm, comforting blanket. After Alice promised to attend a healing session that evening in the church, Fr. Fisher left, in order to take in what had happened. Hearing the news that she could walk, her husband Frank returned home from work early. She ran down the drive to meet him and they hugged each other with joy in their hearts. That night they went as a family to give thanks in the church. The parishioners gasped in amazement when they saw that Alice was walking. But she still had no idea who the “old man” was. Back home, she became emotional and told Frank that she had seen Moses. She slept well that night, without having to take any tablets or sleeping pills, but her husband was worried that this was all a dream, and he kept a vigil by the bed.

Frank was concerned that her previous condition might return, which would be a sad disappointment. But instead he was about to witness a further miracle. Every morning Frank dutifully packed an ulcer that had left a gaping hole in her left heel. That night he had readied the bandages that would be needed for dressing the wound. He warned Alice that it might be painful now that sensation in her left leg had returned. The next morning he prepared to dress the wound as usual, but the ulcer was no longer there! At first Frank thought she had given him the wrong leg. But there was no sign of the ulcer, not even a mark. They found the dressing rolled up in the bed. Frank wept, saying that it was a miracle.
That evening Alice returned to the church again to receive Holy Communion in thanksgiving. She felt that she was seeing everything with new eyes. The words of the liturgy became real, and it seemed that she was truly participating at the Last Supper. As she left the service, Fr. Fisher handed her one of the Padre Pio novena prayer cards. She realized at once that Padre Pio was the old man at the healing. She was relieved to find that he was a real person and not imaginary. But she was shocked to learn that he had died in 1968. And so began her quest to find out “Who is Padre Pio?” 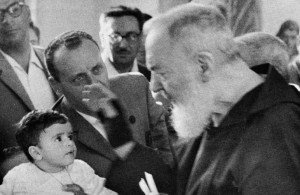 Note:  Comments from sedevacantists who question, doubt, or are offended that Padre Pio assisted a non-Catholic Anglican in his healing ministry will not be approved.  Sedevacantism is a dead end, see my prior post on this topic.