How he saved her from a violent attack, and how she saw the Host turn into real flesh. She mentions a book containing the Prophecies of Padre Pio kept by his Friary.


When Irene Gaeta was nine years old and living near Ostia, Italy, she became so traumatized and upset from an attempted rape by a young man that she feared telling anyone about it, not even her parents or the parish priest. She had been lured to the home of an older girl that she knew, where there were a number of other girls and a half-naked man waiting in a bedroom. After she entered, someone locked the door with a key and the young man threw her on the bed. She doesn't remember how, but she got away from under him, falling on the floor. Screaming for help, in her panic she managed to get through the locked door and was able to escape. Afterwards, she lived in fear, afraid to tell about it lest they try to take her again as revenge, and afraid that her father would come after them with a shotgun if she told her parents.


Irene was born in Lanciano to a family with strong Catholic faith and traditions, which was blessed with many priestly and religious vocations. She has always loved the Church, and would give her life for Her, and has always been unconditionally obedient and loyal to priests and pope. Undoubtedly accustomed to prayer even as a child, she received an unexpected visit from a priest some months after her terrifying experience.


It was the evening of June 18, 1946; as she was getting ready to go to sleep for the night, her bedroom became filled with a bright, supernatural light. In that light she could see a priest with a beard, dressed in sacred vestments of white and gold. He appeared to be celebrating Mass, and he blessed Irene with the monstrance. The look in this priest's eyes cut her to the quick, and the emotions she felt in that moment were indescribable. The priest told her to pay careful attention to everything that she sees. Then she saw the host turn into real flesh, and when he raised the chalice, the wine become blood, which overflowed and rained down upon the hands and arms of the priest. As he returned the chalice to the altar, he calmly told Irene not to worry or be afraid.


Following the advice of her grandmother against diabolical deceptions and illusions, she asked him three times who he was. He answered that he was Padre Pio of Pietrelcina, but she had never heard of that town. She told him that she did not know him, and he responded that he is a friar who prays, and one day she will know him. He gave a little tug to her ear, and then showed her what had happened to her not long ago in that bedroom. He said that he was the one who had saved her, opening the door that had been locked securely with a key. She asked him how he could know this event in her life, since not even her parents knew about it. The priest responded “I know everything about you, because ever since you were born, the Eternal Father has entrusted you to my hands. I have saved you and will always save you.” 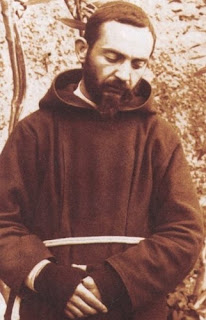 He came closer, now no longer wearing the priestly garments, but dressed as a Franciscan friar. Sitting beside her on her bed, he took her hands in his, telling her not to be afraid, adding: “Look my daughter, this is not a dream, this is reality.” As proof, when she gets up in the morning, she is to tell her parents everything about this. “Tell your father to remain calm because all will be well.” Her father had recently lost his job and did not know whether he should stay in Rome. Padre Pio told her that in three days he will receive a letter offering work with a salary. “And so that your parents believe what you are saying, tell your mother that I know she had a miscarriage.”


Still a child, Irene did not know what a miscarriage was, but her mother confirmed that it had happened, without explaining to her what it meant. Then in thee days a letter arrived from the State Forestry Commission saying that her father had been given a job, and because of his previous good work record and large family, a pension was included. (He had been responsible for the Gardens of the Quirinale, at the service of the King of Italy, until his dethronement by referendum.) Everything was resolved as Padre Pio predicted.


From then on, over the course of many years, Padre Pio helped Irene in all the circumstances of her life. He would often visit her in bilocation, and sometimes she saw him in her dreams. Under his guidance and spiritual fatherhood, she learned to pray to the Eternal Father, the Sacred Heart of Jesus, and to the Heavenly Mother. Sometimes he requested her to pray to save people from the accidental explosion of mines or of unexploded bombs. She approached many people about the Faith, praying with them and inviting them to conversion and confession. He always told her what would happen to her or to her family, no matter if it was good or bad. Since the predictions were not always good news, they began to call her “the little bird of bad tidings.” All this time she did not really know who Padre Pio was.


Then one day in the spring of 1957 she was surprised to see his picture on the front page of a newspaper, and she exclaimed to her mother, “This is the friar I always see!” It was only then that she realized that he was still living. She had thought that he must be a saint from the past, since she had been graced with visits from St. Anthony of Padua, St. Gabriel of Our Lady of Sorrows, and the holy souls in Purgatory. The picture in the paper said he was from San Giovanni Rotondo, though she only knew him as Padre Pio of Pietrelcina. As she gazed at the photo it seemed to come to life, taking form before her very eyes. He did not say anything, but looked at her as he did on the first night that he had visited her. She had the feeling he was chiding her for not having come come to see him at his friary. 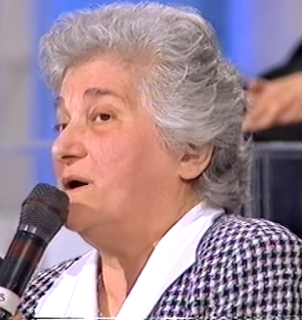 She wrote to him and he replied. Finally, over two years later, when she was 23, she arrived a San Giovanni Rotondo. It was during the time when Pope John XXIII had placed many restrictions on his ministry. It was extremely difficult to meet with him, and time limitations were placed on his confessions. She entered a confessional, and although Padre Pio was in his friary cell at the time, his face became superimposed over that of the priest who was there. She made her confession to him and he told her many things which she can not repeat. He also gave her some instructions regarding her companion Lucia. He then disappeared, no one else having seen him.


Later he appeared in bilocation to Irene in her hotel room, and told her to return to Rome via Frosinone with her friend Lucia. There was a man dying there who had not seen his daughter for ten years. It was Lucia's father who was dying, and he had asked Our Lady to see his daughter one more time. Irene did as Padre Pio wished, and as they drove to Frosinone, Lucia was amazed since she had never told Irene that her parents lived there. Only a few hours after the reunion between Lucia and her father, he passed on to the Heavenly Father's House, his prayer to Our Lady having been granted.


Irene became an active spiritual daughter of Padre Pio, first going on her own and then organizing several trips to San Giovanni from Rome. As a spiritual father, he did not just look after the souls of his children, but truly and lovingly cared about their whole lives, their activities and their families. Because of her love for the Lord and all that had happened to her, Irene often thought of embracing the monastic religious life. She became a Franciscan Tertiary and embraced the efforts of Catholic Action. When Bishop Ettore Cunial, who was Vicar of Rome at the time of her youth, heard about her experiences with Padre Pio in bilocation, he asked her why she had never told him about it. She answered that until she met him in the flesh, she did not tell anyone except her family because she thought it was a ghost who used to appear to her.


In 1961, on one of her visits to Padre Pio (in the flesh) at his friary, she told him of her wish to enter a convent, and he replied that there is nothing more beautiful than a true vocation. He added, “In three months I will tell you what you must do.” When that time arrived he told Irene that he wanted to acquaint her with the elites of the high aristocracy, not because she is to live like them, but to help her understand how poor they really are inside. In a short time, she opened a high fashion atelier as a designer on Rome's Via Frattina. Among her clients were the greatest names of the aristocracy and of the world of entertainment. It that way she was able to help many people return to the love of God and live a life of grace. 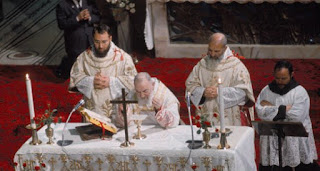 Irene eventually married, with Padre Pio's approval of course. She is involved in a host of spiritual and charitable activities, primarily centered on the parish of Vitinia, a Rome suburb. Padre Pio, who has guided her even after his death, asked her to form an association of souls who live the gospel the way he lived it. With a Rule written by the late Father Gerardo Di Flumeri, the vice-postulator of Padre Pio's canonization, the group is called The Disciples of Padre Pio. Initially she was scandalized when Father Gerardo suggested that name, since disciples should be of Jesus. But he told her that “In Padre Pio, Jesus lived! The stones of San Giovanni Rotondo are bathed in the blood of Jesus. If it had not been Jesus in him, he would not have lived more than three days for the blood he was shedding! The Disciples of Padre Pio is also written in the book of his Prophecies.” He then gave specific page numbers. Irene asked Father Gerardo to say something more about these Prophecies to her, and he replied “No! It will be given up drop by drop within 100 years, otherwise the world would be upset!”

This article is based on Irene Gaeta's own testimony [here] and on her interviews with Jim Gallagher as reported in his excellent book Padre Pio the Pierced Priest [here].

View my writings on Padre Pio and others Here