Padre Pio's Prayer for the Church


". . . pray that He Himself will take on the defense of Jesus in the Sacrament, either by bringing about an end to the world or to stop so much iniquity."


Padre Pio composed a powerful, beautiful, and still-timely prayer for the Church as part of a letter he wrote just over 100 years ago to one of his spiritual daughters, Annita Rodote.  Addressing our Heavenly Father, he wrote:

"May the apostasy of many souls belonging to the sheepfold of Jesus Christ come to an end once and for all.  May God's reign come soon; may this most holy Father sanctify His Church; may He abundantly shower His mercy on those souls who have not known Him up to now.  May He destroy the reign of Satan and reveal, to the confusion of this infernal beast, all his evil snares; may He reveal to all slaves of this awful wretch what a liar he is.

"May the most tender Father enlighten the intelligence and touch the hearts of all men, so that the fervent may not become cooler or slow down in the ways of salvation, that the lukewarm may become more fervent, and those who have moved far from Him may return.  May He also dissipate and confuse all the wise of this world so that they do not wage war and inhibit the propagation of His reign.

"Finally, may this most holy Father banish from His Church all the dissension that exists, and impede the birth of more, so that there will be only one sheepfold and only one Shepherd.   May He multiply a hundredfold the number of chosen souls, send us many saints and learned ministers and sanctify those we already possess.  May He, through them, make fervor return to all Christian souls.

"May the number of Catholic missionaries increase, as we once again have reason to complain to the divine Master: "The harvest is plentiful, but the laborers are few."

"Annita, don't ever forget to pray for these needs which I have set out.  Thus, without your either being an apostle, a priest or a missionary, you will gain that crown which the heavenly Father has prepared ab aeterno for them. 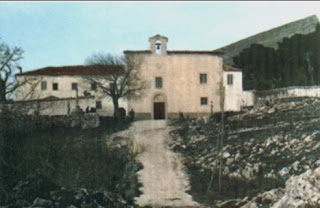 Padre Pio's then-isolated Friary in San Giovanni Rotondo around the time he received the stigmata in 1918.

"But there is another prayer which you must never neglect:  See how much scorn and sacrilege is committed by the sons of men towards the Most Holy humanity of His Son in the sacrament of love?  It is up to us, Annita, as we have been chosen beforehand by the Lord's goodness, to be members of His Church, or as St. Peter says: of a "royal priesthood." It is up to us, I repeat, to defend the honor of this meek Lamb who is always concerned when the case of souls is in question, but always silent where His own case is concerned.

"Let our entire lives, our every action and all our aspirations be completely directed towards making reparation for the offenses which our ungrateful brothers continually do to Him.

"But our thoughts must be raised higher still.  There is a Father up there who alone can and must give everything to glorify this most holy Son of His.  We must knock at this divine Father's heart, with holy and filial confidence, and pray that He Himself will take on the defense of Jesus in the Sacrament, either by bringing about an end to the world or to stop so much iniquity."

View my Padre Pio books and others Here.