One of the very first newspaper articles about Padre Pio was written by Renato Trevisani for the “Mattino” of Naples, and appeared in the editions of June 20 and 21, 1919. Trevisani had been assigned as the paper's special correspondent to investigate and report on the stigmatized mystic of San Giovanni Rotondo. Initially skeptical, thinking Padre Pio might be a “Rasputin,” he was won over by the friar's demeanor, and was an eyewitness to a miraculous cure.


The recipient of the cure, Pasquale Di Chiara (1881 – 1946), was a functionary of the Ministry of Justice, as chancellor of the prefecture of San Giovanni Rotondo. He was 36 years old at the time, residing at Lucera, about 25 miles from San Giovanni. He had been chancellor at Messina, Sicily, during the great earthquake of 1908 which killed tens of thousands of citizens. For his brave and selfless actions in aiding the wounded and homeless, he merited the official praise of the King's Procurator of the Tribunal of Messina.


In 1918 he received the injury which was subsequently healed by Padre Pio. Pasquale was in Lucera to attend a formal celebration to mark the end of the war between Italy and the Austro-Hungarian Empire, which was concluded by the Armistice of November 3. Civil, military, and religious authorities were present. While descending the stairs of the hotel where the ceremony was held, he took a very serious fall. For three months he was immobilized, and when he finally was permitted leave his bed, he could only limp along by dragging his leg, painstakingly supported by a cane. When he finally decided to visit Padre Pio at San Giovanni Rotondo, it was not, however, to seek his own cure, as one might think. Instead he sought healing for his three-year old daughter Italia, stricken with infantile paralysis.


The journalist Renato Trevisani obtained the following account from Di Chiara himself of the miraculous occurrence, and included it in his article for the “Mattino.” He writes that he was an eye-witness to the prodigy, along with other distinguished personages present at the time who can authenticate it, including the King's Procurator of the Tribunal of Lucera, Dr. Mione; Prefecture Advisor of Sanseverino, Dr. Russo; Dr. Giura; and Vice Magistrate N. Siena. 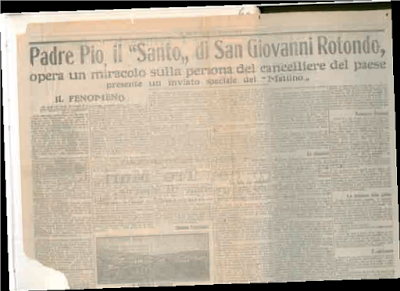 The headline for the story ran across top of the entire page: “Padre Pio, the 'Saint' of San Giovanni Rotondo.” Underneath it ran the sub-heading “works a miracle on the person of the chancellor of the town.” The story was in three sections: the Phenomona, Padre Pio, and the Miracles. The images show only a small part of the complete piece. Pasquale Di Chiara's testimony, as reported in the newspaper, is presented here for the first time in English.


“On November 11, 1918, on the occasion of the conclusion of the Armistice, a small celebration was held at the Hotel Sicilia. Coming down from the hotel, I fell head over heels. After spending three months in bed, under the care of Doctors Merla and Giuva, I was constrained to walk with a cane, dragging my leg, and unable to sustain long walks. At Foggia, I underwent an x-ray examination under Doctor Bucci, which revealed a dislocation.


“I went to the Friary for the first time, together with my wife, to ask Padre Pio for a grace for my little girl of three, Italia, suffering from infantile paralysis. Padre Pio told us to throw away the orthopedic apparatus used on the leg of the child; but my wife, a little wary, did not want to follow the advice. The next day the apparatus broke. My wife told Padre Pio that the child still was not cured, and the friar responded: “It was your fault! Hope, but in God.”


“I arrived [another time] at the friary, accompanied by my superiors, who were guests of the city of San Giovanni Rotondo. Seeing me, Padre Pio made a gesture of gentle reproof with his hand, which, however, I did not understand. I remained in the corridor, and in about an hour Padre Pio returned. He stopped before me and said, with his eyes turned upward, a phrase in which I could only make out the word “cane.” My friends, Michele Campanile and Benedetto Ventrella, explained to me that Padre Pio had said, “Throw away the cane!”


“He said it a second time, and I let go of the cane, but I remained leaning against a wall. “Man of little faith, go ahead and walk,” commanded the Padre. I then experienced a feeling of great warmth in my foot, which in a short time spread throughout my whole body.  I now walk normally, without any need of help.”


Further details were made known many years later in author Enrico Malatesta's interview with Pasquale Di Chiara's son Umberto, the brother of Italia, who was affected by polio. Following the unexplained breakage of her orthopedic equipment, and the rebuke by Padre Pio to her mother, Italia soon began to walk without requiring any assistance, although with a slight limp. As for Pasquale, he would recall Padre Pio's words: “Man of little faith, go ahead and walk” for the rest of his life. They were spoken with irritation, but in a tone of voice that was at the same time both gentle and gruff. At his command, Pasquale took one step, then two, three and four, and began to cry from joy and emotion. He started to walk faster, and found himself at the feet of Padre Pio, who blessed him with a bright smile. 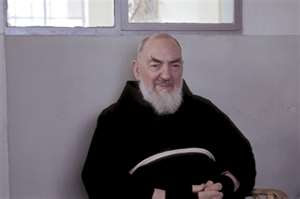 
View my books on Padre Pio and others Here.
Posted by Frank Rega at 12:55 PM