The Ten Commandments of the Great Reset.

Sometime around 1979 or 1980, a “small group of loyal Americans,” whose identity remains unknown to this day, commissioned a granite company in Elberton, Georgia, to build a monument reminiscent of Stonehenge. Called the “Georgia Guidestones, they are comprised of five granite slabs almost twenty feet tall, which are capped by another large slab. Written on the slabs in eight contemporary languages are ten rules, or guidelines, which some contend are the basis of the New World Order. (See online Smithsonian article from 2013). Here are the guidelines, which one conspiracy theorist describes as the outline for a “totalitarian tribal government.” 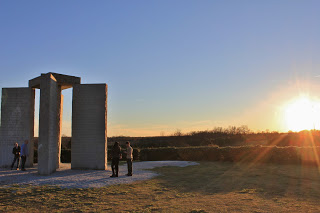 The monument has recently been in the news, at least in Italy, when on June 2 an Italian language website reported that none other than Archbishop Carlo Maria Vigano cited them in a talk, describing them as the new ten commandments for the “Great Reset.” Referring to the first guideline, the article reports this about Vigano’s speech (thanks to Google Translate:)

“And in this regard he mentions the "Guidestones", the monument of the New World Order in Georgia, in which the new "10 commandments" are written. The first point is in fact engraved: "Keep humanity under 500 million inhabitants". Viganò miming states: "Does this remind you of something?", Evidently referring to the widespread theory that that elite would have in mind to decimate humanity with ongoing experimental gene therapies of which no one is able to explain the adverse events in the medium and long term term. And he cites again in the introduction the famine with which Stalin exterminated millions of Ukrainians.”

I find it interesting that there is no direct mention of God in these rules, other than a brief reference to “the infinite” in number nine, which is nothing but New-Age-speak. And number two, what else is it but a program of Darwinian eugenics, so that only the fittest and the best survive. Number four buries faith under the dominion of reason, which is contrary to Catholic teaching which holds that "Faith and reason are like two wings on which the human spirit rises to the contemplation of truth." --Pope St. John Paul II.

The secularists can make their own Godless rules for life if they wish, but they are destined to become empty, useless, and even damaging. One can do nothing without the Lord, for in John 15:5, Jesus says, “Apart from me you can do nothing.” Further, Our Lady at Fatima promised that her Immaculate Heart will Triumph. So don’t fear the Great Reset or whatever else is planned, it will fail!