Were there two Sister Lucy's?

The Tradition in Action website has published a series of articles investigating the possibility that the Fatima visionary Sister Lucy was at one point replaced by a double, in order to silence her conservative voice, and to further the progressivist agenda of  Vatican II.  One of their articles presents a series of photos comparing historical photos of the "real" Sister Lucy to more recent photos of the alleged "double."

Recently, one of the website's readers sent them an email that mentions a video which purportedly shows a reliable method of comparing the photos of two people to help determine if they are really of the same person.  Like most such approaches, it is not infallible, but it can indicate with high probability if the persons are not the same.

In Tradition In Action's  "People are Commenting" page of February 9, 2017, you can read the email from "G.A." regarding the "eye-tooth" method of determining whether two photographs are of the same person.  The email links to this video on YouTube which explains how to use this method.  Basically, it is based on the distance between the pupils of the eyes of a person, and the distance from the eyes to the tips of the upper teeth.  These features are permanently embedded in the bone structure of the upper face.  Therefore, any adult should always have a constant ratio between the two distances. 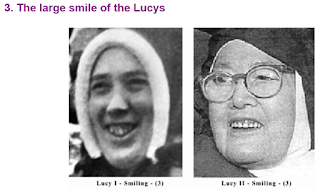 Thus, if the premise about the eye-tooth ratio is correct, as reported on the video, then it is almost certain that the two photos are NOT of the same person.

Update 03/31/17.   I tried this with some photos of a young Paul McCartney vs. older; and found no difference in the eye-tooth ratio.
Posted by Frank Rega at 6:58 PM 2 comments: