Under the "spell" of the Mass

An excerpt from a letter to his wife by John Adams, second President of the United States:

"This afternoon, led by curiosity and good company, I strolled away to mother church, or rather grandmother church. I mean the Romish chapel. I heard a good, short moral essay upon the duty of parents to their children, founded in justice and charity, to take care of their interests, temporal and spiritual. This afternoon’s entertainment was to me most awful and affecting; the poor wretches fingering their beads, chanting Latin, not a word of which they understood; their pater nosters and ave Marias; their holy water; their crossing themselves perpetually; their bowing to the name of Jesus, whenever they hear it; their bowings, kneelings and genuflections before the altar. The dress of the priest was rich white lace. His pulpit was velvet and gold. The altar-piece was very rich, little images and crucifixes about; wax candles lighted up. But how shall I describe the picture of our Savior in a frame of marble over the altar, at full length, upon the cross in the agonies, and the blood dropping and streaming from his wounds! The music, consisting of an organ and a choir of singers, went all the afternoon except sermon time, and the assembly chanted most sweetly and exquisitely.
Here is everything which can lay hold of the eye, ear, and imagination–everything which can charm and bewitch the simple and ignorant. I wonder how Luther ever broke the spell. Adieu."

"Here is everything which can lay hold of the eye, ear, and imagination." Yes, that truly was the genius of the Old Mass!  But don't worry President Adams - thanks to the aggiornamento of Vatican II and the modernist changes that followed in its wake, we have finally updated the liturgy.  No more Latin mumbo-jumbo, no more pious hocus-pocus and chanting, no richly decorated altars. We have Protestantized the liturgy to accommodate people like you Mr. Adams, rather than the "simple and ignorant." Regarding that graphic portrait of the Crucified Christ, you will be pleased to know that we have downplayed the sacrificial nature of the Mass, emphasizing instead the communal meal aspect. You may rest assured that there is little chance that anyone will ever come under the "spell" of the new liturgy.

Every conception is immaculate because a child is involved


Although Walt Disney considered himself to be a religious person, he did not attend any church.  He had a strong belief in God, and respected the religion of others.  Once one of his employees, apparently a Catholic, asked him if he believed in the Immaculate Conception.  He answered that he believed that every conception is immaculate, since a child is involved.

He and his wife Lilly sent both of their daughters, Diane and Sharon, to Sunday school, but did not impose their religious views on them.  When Diane began to attend a Catholic school, Walt wrote to his sister Ruth that Diane seemed to enjoy it, being quite taken up with the various rituals and the catechism. She had not made up her mind on whether to be Catholic or Protestant, but Disney was not concerned about this.  He felt that his daughter was intelligent enough to decide what she wanted, and that it was her privilege to make the decision.

During his lifetime he never made a religious film, since he did not want to mix religion with entertainment.  Churchmen were seldom portrayed in his pictures. 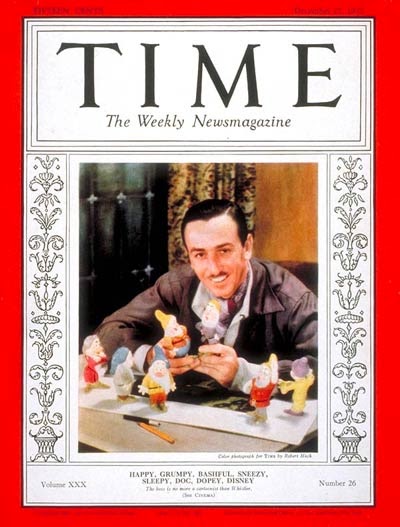 Based on information from Walt Disney an American Original, by Bob Thomas, 1994, New York, Disney Editions.
Posted by Frank Rega at 2:26 PM 3 comments:

"The Mass of Padre Pio!  No one will be able to describe it.  Only one who has had the privilege of living it can understand. . . "


Fra Modestino Fucci (1917-2011) was a saintly lay brother who lived alongside Padre Pio at the Friary in San Giovanni Rotondo for many years.  He often had the privilege of serving at the traditional Latin Mass celebrated by St. Pio.   The saint's death in 1968 signified the culmination and close of a great era in the Church.  The very next year Pope Paul VI issued the missal for the Novus Ordo liturgy, almost putting an end to the Mass that made Padre Pio.  Brother Modestino carefully recorded his impressions of what it was like to serve at the Holy Sacrifice of the Mass celebrated by St. Pio, and they have been published in the current issue of the Friary's magazine, "The Voice of Padre Pio."  The following excerpts are presented, with permission, from the article "Witness to the Padre," pp. 19-20. 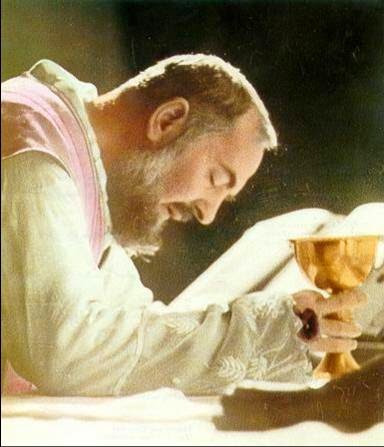 I would watch and observe Padre Pio closely every time, from the moment he left his cell at dawn to celebrate Mass.  I would see him in a state of suffering and anxiety.  He seemed restless.  As soon as he reached the sacristy where he put on the sacred vestments, I had the impression that already he was no longer aware of what went on around him.

He was totally absorbed and conscious of what he was about the fulfill.  His face which was of normal color became frighteningly pale when he put on the amice.  From that moment onwards he paid no more attention to anyone.  Clothed in the sacred vestments he made his way to the altar.  Even though I walked ahead of him, I was aware that his gait became more dragging, his face sorrowful.  He seemed to stoop always more, as if, I thought, crushed beneath the weight of a gigantic invisible cross.

Once he arrived at the altar he kissed it lovingly and his pale face became inflamed.  His cheeks would become crimson, his skin translucent so that one almost saw the flow of blood that rushed to his cheeks.  After the Confiteor, he beat his breast with hollow and heavy blows as if accusing himself of all the worst sins committed by man.  His eyes remained closed without being able to prevent big tears that disappeared into his thick beard.

At the Gospel, as he announced the Word of God, it seemed as if he fed himself with these words, tasting their infinite sweetness.  Immediately after, the colloquy between Padre Pio and the Eternal began.  This colloquy caused Padre Pio to weep abundant tears, that I saw him wipe with a big handkerchief.  Padre Pio, who had received the gift of contemplation from the Lord, entered into the abysses of the mystery of the Redemption.  The veils of that mystery having been torn by the suffering of his faith and love, all things human disappeared from his sight.  Before his gaze was God alone! 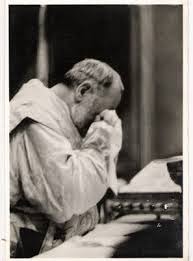 Everyone saw Padre Pio suffering.  He pronounced the liturgical prayers with  difficulty and interrupted by sobs.  The embarrassment the Padre felt at being in the presence and the searching gaze of others was enormous.  He would probably have preferred to celebrate Mass in solitude so as to be able to give free rein to his suffering and to his indescribable love.

In those moments Padre Pio lived sensitively and really felt the Passion of the Lord.  Time went quickly, but he was outside time!  That was why his Mass lasted an hour and a half or probably more.  At the Elevation his suffering reached its height.  Watching his weeping, his sobbing, I was afraid his heart would burst, that he was about to faint from one moment to the next. God's Spirit had by now penetrated his whole body.  His soul was rapt in God.  He offered himself with Christ, victim for his brothers in exile.

Each gesture of his denoted his relationship with God.  His heart must have burned like a volcano.  He prayed intensely for his spiritual children, for the sick, and for those who had already left this world.  Every now and then he leaned on the altar on his elbows, probably to relieve his wounded feet from the weight of his body.  I heard him repeat often through his tears: "My God! My God!" A spectacle of faith, love, suffering and emotion that reached the point of drama when the Padre raised the Host.  The sleeves of the surplice came down and his torn, bleeding hands were in the sight of all, whereas his gaze was on God!

At Communion he seemed to calm down.  Transfigured in a passionate, ecstatic abandon, he fed on the Flesh and Blood of Jesus. How much love emanated from his face!  The people, astounded, could not but kneel before that mystical agony, to that total annihilation of himself. The incorporation, the assimilation, the fusion was total!  Padre Pio would remain as if stunned as he tasted all the divine sweetness that only Jesus in the Eucharist knows how to give.

So the sacrifice of the Mass would be completed with a real participation of love, of suffering and blood.  And it brought about many conversions.  At the end of the Mass another suffering would devour him - that of going to the choir loft to remain alone and in silence, recollected in prayer to be able to thank Jesus.  He would remain immobile as if without life.  If someone had shaken him he would not have noticed, so absorbed was he in divine contemplation.

The Mass of Padre Pio! No one will be able to describe it.  Only one who has had the privilege of living it can understand. . . 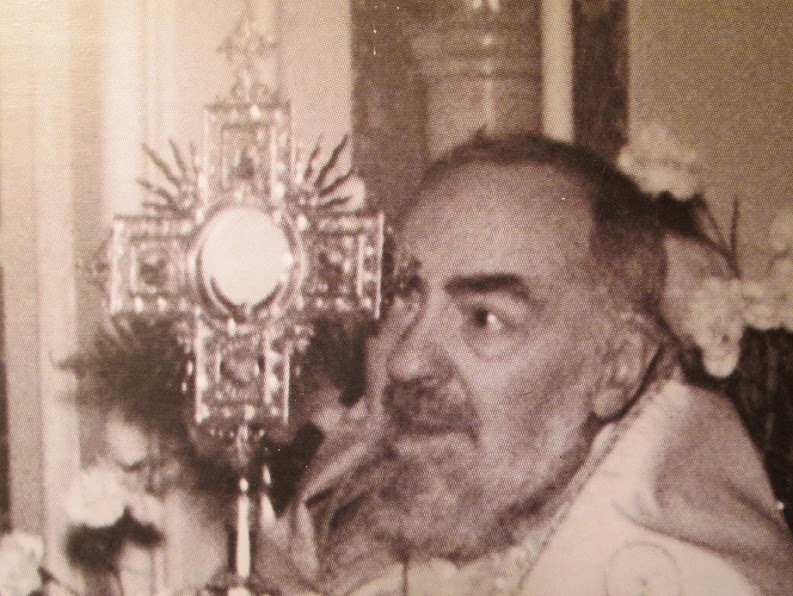 "The Voice of Padre Pio" is a bi-monthly magazine published by his Friary in Italy.
For Subscriptions please contact the international information center nearest you: Info Centers.
Or in the USA and Canada send a check for $21.00 directly to the Friary, made out to
Edizioni Voce di Padre Pio
mail to:
The Voice of Padre Pio
Piazzale Santa Maria delle Grazie, 4
71013 San Giovanni Rotondo (FG)
Italy
(Please check Internet for current international postage rates.)
Posted by Frank Rega at 3:22 PM 27 comments: